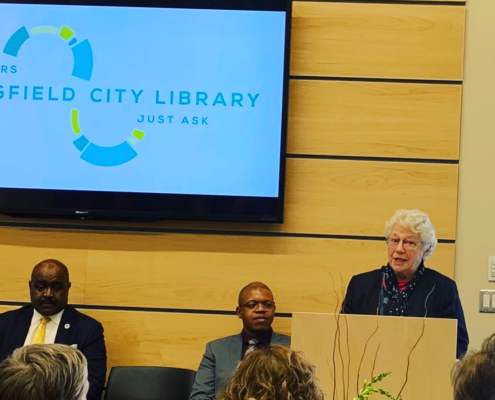 We have come together to celebrate the completion of this gorgeous Library in our East Forest Park Community. You may be surprised to see me rather than former Mayor Charlie Ryan but when we looked at the group of speakers for today, there was no doubt that the list was overwhelmingly male. So Charlie graciously stepped back for me. Which might be fair considering that it was I who had to work hard to convince Mayor Ryan in 2005 that once the bequests and endowments were ready to be transferred from the Museums Association, we needed to have a non-profit Foundation ready to receive them. So Atty. Brenda Doherty did the heavy lifting; I helped with some of it and with Mayor Ryan’s approval the Springfield Library Foundation was born and he was its first President.

One of our most important jobs was to become familiar with the wishes of about 30 donors who had made bequests to the Springfield Library. We wanted to understand and comply with the wishes of this group of generous donors who were interested in supporting and improving our Library System. The dates on these gifts ranges from 1869 to the most recent, 2018, and their amounts range from a few thousand to Annie Curran’s gift in 1954 of 1 million dollars.

Let me mention a bit about Annie Curran who lived on Dartmouth St. in the community around what we called, Winchester Square, now Mason Sq. I like to say that she married well having benefitted from the Wills of her 3 husbands. Library lore tells us that she would send her chauffeur to the store-front library on Catherine St. to pick up her books. When she died she decreed that her gift must be used to build a new library in Winchester Square. By the time the Foundation was formed, her gift had increased to 4 Million. And so, thanks to Annie Curran, we now have the wonderful Mason Square Library the way it is today.

Thus the Foundation became a significant part of the City of Springfield’s efforts to support a modern, not just up to date, but a leading Library System among Massachusetts libraries. And, over the past 14 years the Foundation has contributed more than 5 million dollars to our Springfield Library system for projects, for books and materials, as well as staff training.

We must thank former Mayor Ryan and our Mayor Domenic Sarno for their continued and vigorous practice of supplying vital and crucially important funds from the City Budget. Thanks to the City, the State, and the Foundation this East Forest Park Library we are proudly meeting in, is a leader among the Libraries of the nation.

However, this is simply a building, superb as it is, beautiful as it is, well furnished and supplied as it is – it is just a building. It will come alive only when the most essential ingredient is added to it – Librarians. People leave money to causes they have come to value and cherish. Librarians make that possible by enabling the public to take full advantage of the variety of services the Library delivers. Librarians, as do teachers, open doors for us, inspire us to search for information, to learn, to enjoy the wide world of benefits that Libraries supply.

And so, today, we celebrate the opening of another source of pleasure, inspiration and education that we all need so much. We thank the people who helped to make this indispensable project happen. And we heartily welcome the folks who will infuse this building with life and fire: our Librarians.